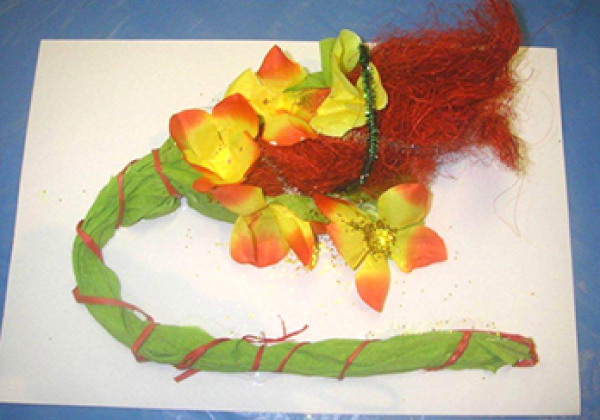 This object was created by a lady in her 50’s who had suffered recurring episodes of severe depression and had commented that she felt her life had been of little value. We worked together over a period of twelve months and over time she was able to make images and objects that allowed her to describe her emotions in a way she could not do in words.

She described this object (made out of crepe paper, twine, flowers and straw) as a description of what it is like to suffer with depression. She said I feel all tied up, strangled by a rope that won’t let the beauty out. I know it is there, I just can’t access it . She described the frustration and anger at being stuck in an illness that made her feel defeated.

The psychotherapeutic work that was conducted over this period of time, helped this lady come to an understanding that she had not lost parts of herself and that she could access them if she felt safe and contained. Art Psychotherapy facilitated this growth for her. 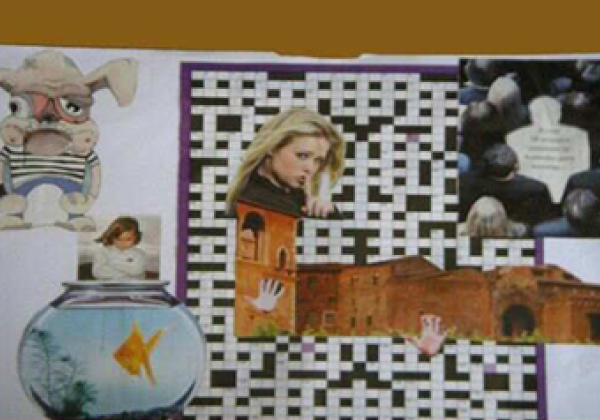 This is an image created by a client who was doing a representation of a DBT ‘Distress Tolerance’ skill. The Distraction skill is called ‘Pushing Away’. She describes that she feels like a battered bulldog, all bandaged up, she looks like the girl with folded arms looking into the fishpond being lured by the hook. She comments she will not take the bait of family pressure or she will end up stuck in the bowl like the fish. She has a finger to her face backed by a cross word. It feels like she has had to ‘not say a word’ and that the words all have different meanings for her. Hands up saying “NO, go away”. Most of the time she says she feels like she is an ‘invisible figure’ in the crowd and does not want to be identified or noticed. The way she has used art psychotherapy to express herself has helped her to translate her emotional experience outside of herself and over time she has learnt to re-integrate her emotional experience in a healthy way by connecting in our therapeutic relationship. 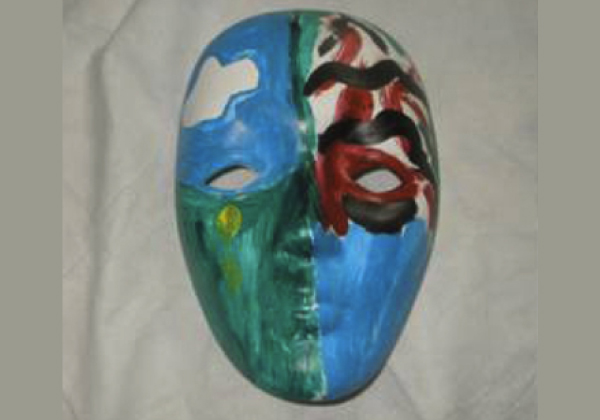 “The left side of my face looks like this as some days I see a blue sky with clouds passing by, but even though I am calm (green representing calm) I feel there are always tears underneath I cannot control. On the other side of my face there is fear and pain and terror that I see but I put on the mask that all is OK (the blue).” This lady presents often as calm and collected but during our period of working tougher (4 years) she has been able to express through Art Therapy her deep fears and confusion at experiencing terror one minute and a chronic feeling of emptiness in the next. Through Art Therapy sessions she has been able to develop a greater sense of who she is and how she has inner strength and courage to overcome the symptoms of her illness. 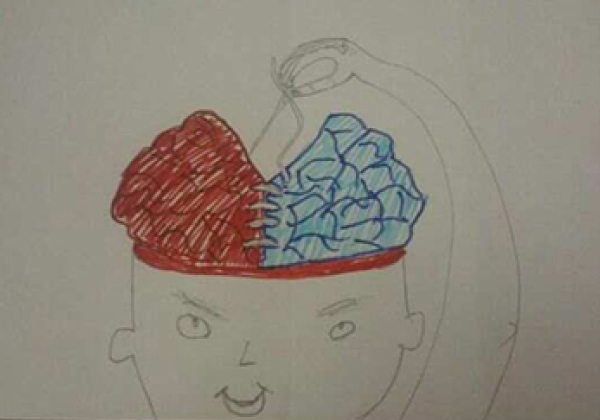 “With Wise Mind I realize my Bipolar disorder makes me feel I have two sides to my brain, always different emotions, moods. Wise Mind is me trying to lace up, tie my split brain together.” 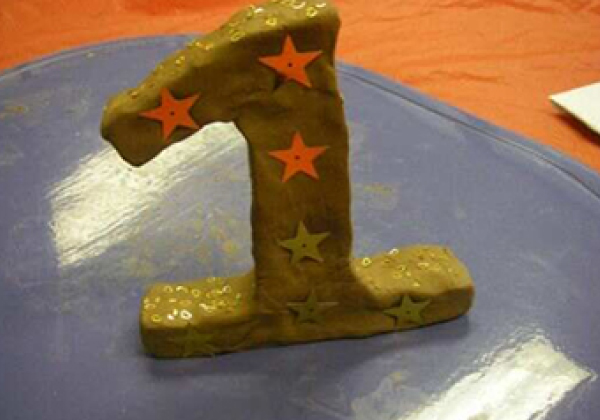 CLIENTS COMMENT ON THE SKILL IN ‘IMPROVE THE MOMENT’ A DISTRACTION SKILL:

“I need to be a strong individual, if I can say to myself I need to be No 1 and give myself credit – stars – for my achievements. This will help to make ME stronger and take care of myself.” 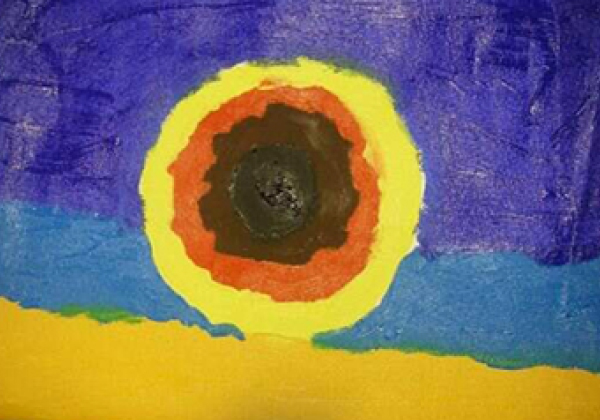 “I am going to do this and use this as a meditation. Primary emotion is fear, I suffer panic attacks. I am going to surround it with secondary emotions of positive emotions, joy, love, peace. It could maybe then contain the fear, keep it locked down. I can imagine I’m on a sandy beach, near clear ocean and deep calming blue sky. I will be the circle.”

“When I communicate well I feel like I have everything in order, colours are bright, cheerful, I glue the sticks on top and on top in rows and it feels rythmical and ordered at the same time. I feel like I am in control and communicating clearly.” 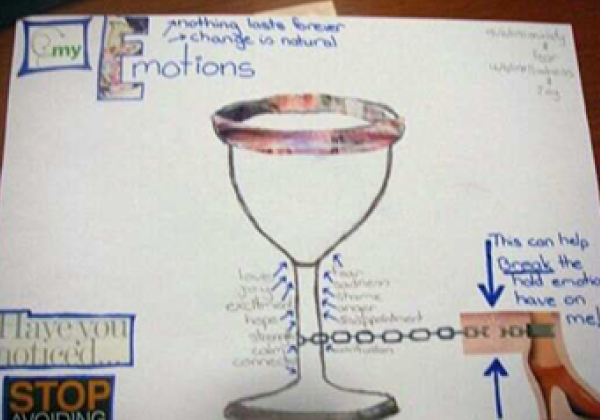 “I’ve spent a lot of time avoiding emotions. Now I can be mindful, notice them. Now I don’t let them take control. I can break the ‘chain’ of fear. I can even write the emotions down, put a name to them, put them in the container a wine glass. I notice I have used the colours to decorate the top of the wine glass that are in the letter E for emotions, must be a connection here not sure what?” 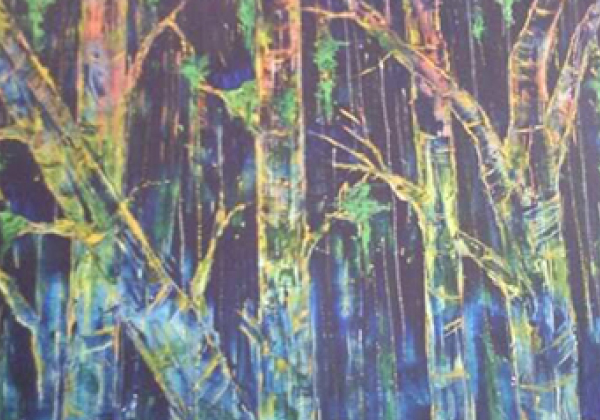 Through my journey as an art psychotherapist creating my own art is a way of expressing my experiences in working with clients. I then can seek supervision on some of the areas where I may need help with helping others. 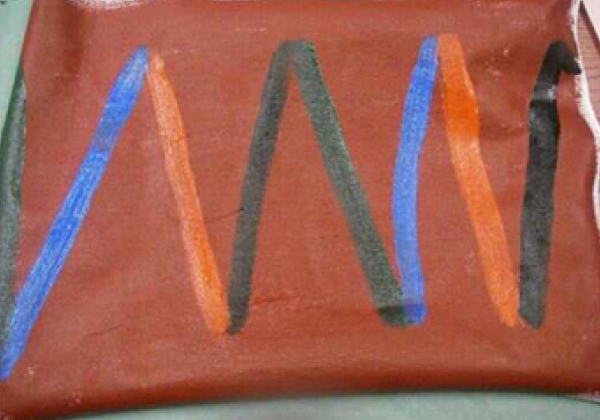 “My base emotion is anger, its Red. I’m surprised it covers the page so thickly. It was hard to push it ‘the paint’ around. The lines are my secondary emotions peaks and troughs, so constant up and down, like a scary roller coaster.”